You are here: Home / News and events / The Working Principle of Closed-loop System of Stepper Motor

The Working Principle of Closed-loop System of Stepper Motor

In Application, the stepper motor can’t directly connect AC power and DC power, it should be equipped with A driver. In an open-loop control system, it can realize the diagonal displacement after receiving the control pulse.

At the same time, it can be used as the servo control system, if the object can be controlled by the stepper motor, then it will reduce the friction and mechanical clearance caused by the reduction mechanism, to improve the precision of positioning system.

In the hybrid stepper motor, there are stator coils on the stator core, small teeth on the inner diameter with the same distance as the rotor. There are two discs on the rotor, which are connected by the cylindrical permanent magnet. The two ends are S pole and N pole.

On the one end, axial magnetization is N pole, and the other is S pole. In reality, the magnetic field line is formed by rotor S, rotor N, and stator in the closed magnetic field. 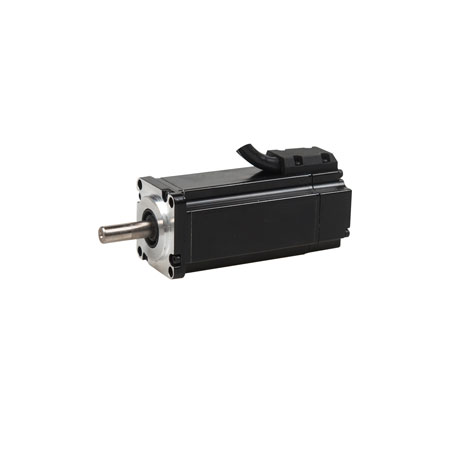 In the surface position of the magnetic disc of the stepper motor rotor, there are 50 evenly distributed gears, the pitch angle is 7.2°. There doesn’t exist a central line in the S pole and N pole of rotor. By analyzing the cross-section of S and N pole in the three-phase stepper motor, in the stepper motor, the six stators magnetic pole form three phases in the two ways and are set on six poles.

Different from the reactive stepper motor, they have the same pole on the corresponding pole. On each stator core, there are 8 small teeth, and the small teeth of the adjacent stator core also half elevation angle staggered.

Due to the difference of current direction in the windings, the total air gap magnetomotive force can be obtained by adding or subtracting two magnetomotive force. For both, they will interact in the air gap position. After the flux line treatment of the A-term pole, the central axis of N-pole will coincide with the central axis of the A-stimulus. The N-core of the rotor will form the maximum air gap track by the A-phase stimulus, which corresponds to the smallest air gap permeance in the A-phase stimulus.

In this case, after the B-phase is powered, the rotor N pole will move to the upper tooth axis of the B-phase stator. In the condition of changing the power on the sequence of windings, it can move to the new balance position.

Generally speaking, according to a certain rule, the actual rotation principle is to connect the three-phase windings A, B, C, and rotate the rotor to the new balance position based on attracting the rotor from different phases, to obtain rotate effect.